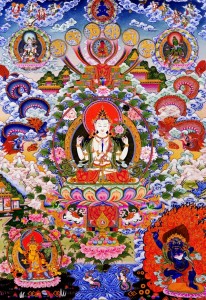 THEATRE IS SPACE ACTUALITY EXTENDING
into transformation to dive under walls of
negative pressures  clouding us and
push upward heaving
shamanized spaces peaceful
intensities to transform the world back
into itself.

The Walls are our Bodies
running blood down space corridors.
And so we clear away
debris and manifest vast scale,
Mind like a canyon with eagles
floating thru.

Shouts from Yawp Cave under mouth,
under Earth. Those long cries.
Indians know how to pound on the earthdoor
to wake up those forces.

Terrific speeds and sudden slowness,
this Mind
poured into and made round & bubbling
from a forming tribal consciousness
that floods this globe.
Black Man, Yellow Man, White Man,
suffering to walk free!

This Earth a mossy ball all wet and
goopy with clouds
sailing in silent black space.

And on this Earth we stand erect or sit erect
with throbbing spines
and minds that light up colors and
send out sights
and breath that makes hollow forest-sigh
trumpet boom bird-whisper.

Enough with us, we manifest Universe!

But Paranoia shrinks accomplishments of
love and wisdom
to a walnut-brained swipe in the dark
at some unbefriended Enemy —
and hasn’t this constant abstracting of man
into Enemy gone on long enough?

So rather than root out Enemy
root out Paranoia
which is the psychotic reversal,
both spiritual and political,
of the Truth
that we are all of One Mind
multiple manifestations, not “mysticism”
but fact
as we breathe in this sea of clouds.

So we attack Paranoia who shrinks itself
separate in fear.
Paranoia the wraithful manifestation of that
One power that also manifests trust.

This Theatre not like a pose facing into some
imaginary space
but like some space of the Imagination
facing into the Actual Moment.

And the Actors not Actors trained to impersonate,
to fake,
but people met on this strange road
cast into this suddenly accelerated
cosmos using their Imaginations as living
progenitors of self-forms
(archetypes) and for a moment becoming
masters of these forms
then withdrawing them and dissolving them
into themselves
and for a time after emancipated from frozen
forms and moving freely.

What happens when people have visions in a
rapture or fall in a meadow laughing.

The Sun rises thru our heads with its wild
arms outstretched benign.

The Sun appears above the horizon with its
wide beams outstretched benign.

And the Earth is so simple,
and to be aware of one’s holy manifestation
seems so obvious,
but mind-shrinkage sticks thru the Ages,
we shake and tremble the foundations
to loose that black tide,

we stand up brazen chanters setting loose
a cool wave,
everyone chants
in the dark den of himself

The Vision of this Theatre is total world
vision of man
as singer struggler sleepy seeker
apocalypse within himself
on the scale of mountains valleys
cities civilizations
skimming on a leaf in the Void.

Which is photo realization of self
taken in a flesh (flash!)
and no image shows up —
there is no “self.”

Which is moving realization of Movement
in space that is Actual,
and out of this blast any new move can be made
to unknot the terror of man
and establish habitable space!

Anecdote of Our Origin 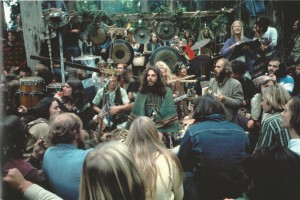 Gorgeous summer 1968 studded with street-fights, tear-gas zephyrs floating on warm breezes, war booming unheard in color beyond the mountains of the sea, heard in the livingrooms of anger, in pulse of youths struggling fiercely against the deepfreeze mentality of warmonger culture, demons raging in our limbs, saintly heroes looking out pool-deep eyes, dancing in the streets, the old fin-de-siecle bulls— recurring like pages flipped in history’s illustrated booklet “Drops of Blood.” In the middle of this, starting in the deepest pit of space available to our psyche, we yearn to conjure up the forces present into precise personifications moving vivified and somehow shamanize these forces into balance. The Tibetan sound of long horns cymbals drums and deep chanting answers by its mountain-peak power the booming-up swell-sound overpowering the cosmos of our senses, the image Demon fighting Saint serves to pinpoint a cross of energies, a Tibetan ritual in which a man made of bread is torn apart and eaten by the crowd answers our need for a primitive Eucharist to bring the mouths of community to the taste of real bread. The Actuality Prophecy, day by day swinging dizzily in the balance of eruption, calls up the title and last line of the Opera “The Walls Are Running Blood” as I had seen once in a vision in the Berkeley Community Theatre listening to Maharishi (Mahesh Yogi) giggle. The religious impulse, since many had gone from the psychedelic illuminations into personal daily practices of meditation and art, decides us to base our work on Zen meditation and Yoga and let the vision of theatre grow out of meditation, and somehow generate in space the intense centered activity of meditation. To spread vision of accomplishment, setting up eddies of peaceful power, to inspire & define states of feeling suffering from lack of vision. Out of nowhere to manifest with simplest means, torches, cloth painted mandalas, cardboard shapes, the highly lit inner / outer visionary world. 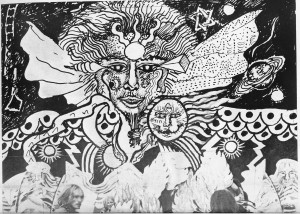 How does Tibetan liturgy chanting differ from catholic priests intoning mass, or how does the religious feeling differ in this play from churchly feeling? There is a growing mystery of racial bond between the Hopi Indians and Tibetans. When I visited the Hopi mesas, wintry night wind gray blowing across the monochrome dust houses, old Hopi man with his gray bangs, wrapped in a maroon sweater, shuffling head-down thru a street, looking out from any point I felt in space, at a tip of earth-height, in the sky with winds and clouds, the great gray sky sloping down from mesa-edges deeply into cloudy valleys. American Himalayas! And when I heard Tibetan chanting I felt how they were calling deep in the bowels of earth, calling out forces of knowingness, digging with belly voices into black ravines, bellowing into the air to release all figures of consciousness wavering unseen in the atmosphere of total Mind. So the Tibetan Vision of this play is an infusion of Oriental Mongol Buddhism and American Hopi all-seeingness fusing in the Imagination. And the religious feeling expands from feeling present on Earth, in the air of Earth, facing that air, stamping on that floor of planet, calling out secrets from Earth and Air to animate the heart-mind of the same substance to swoops of conscious action! But with vision of The Action of Inaction, static whirlwind, strobe-light inner perception of instantaneous moments rising after each other, things move in circles, lines of force, Abstract and Concrete in constant abrupt collision marriage, fluid, quick stops, the body pointing with its voice and arms and stretched in space. Feeling the Mind of air around him, earth under him, sky above him, endless expanses moving out in every direction from him, zoom of light-spaces, Man emerges Whole, his Mind is singing! Manifest this Vision now, set this stirring flood out into the public mind, set in motion the first circles of vibration around us bumping outward, manifest in eyes and speech actuality. 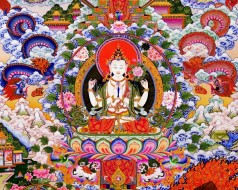 Anecdote of Our Origin

How does Tibetan liturgy chanting differ from catholic priests intoning mass, or how does the