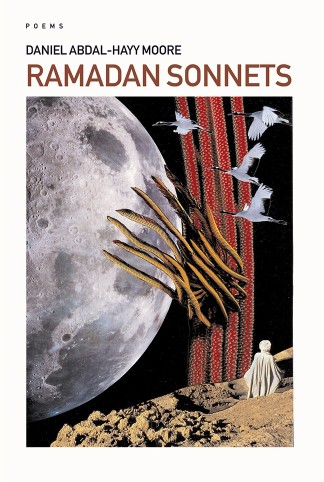 Not always a spiritual meditation, nor often even what should be felt and achieved in the fast (the poems are striving for some reality of feeling and experience), these poems are an imaginatively inspired record of the month, its small epiphanies and grim endurances, heading out from its physical constraints to contemplate a vast panorama, or focusing in on particulars, those embryos of explosive meaning, to evoke the blessed month of Ramadan’s intertwining flavors of asceticism and sensual gratitude, its palatable and palpable Light.

It’s like practicing for death. No food or drink
during daylight hours no matter
what, in the
heat of summer or
cold of winter,
and no way out of it but through

So that
it’s something that comes
inevitably each year, like it or not, whether or not
you’ve got a knack for it, and
some do, and love to fast, and
thrive on it, but
I do not, yet

each year it makes its visit, and year after
year it builds up to be a
sweet thing,

which makes it like death, the way it’s
always on the
horizon, and an
absolute obligation, which must be

why Muslims often die well. They’ve had a
lifetime of Ramadans tenderizing them
for The Inevitable. And The

Headache, the invalid feeling of being sickly and having to
take it easy, testiness when
things don’t go quite
right, annoyance of magnetic
gravity, things
fall in a pile or
slide off an incline – not the

hunger alone that binds us in brotherhood ultimately with
hollow-eyed Ethiopians of
this and all other eras,
but the frailty, the passing alone down the
alien corridors of this world that is such a
poignant reminder to us, so that in our
momentary physiological grayness

when the food finally comes showering at the
end of the fast and turns all things back to
Technicolor again, and we feel
the old soft-shoe lightness in our step again and the
old brightness in our smile,

the cornucopia dome of the sky turned
earthward again, the arid stretch
suddenly fertile, fruits and
flowers as if by
cinematic magic fill our
perceptions, the
floodgate of generosity opened to the
full, then our

body-bound, sense-imprisoned
selves expand past identity with one
hollow-pitted stomach dusty in the
hot rays of a pitiless sun
to a non-entity whose single characteristic is

gratitude and whose
every pulse is animated by the

Single Provider of all this
and every life’s

Ramadan angels crisscross the sky
just above the earth on
watch for fasters who
lift up into other dimensions due to their
turning away from
created things to their Creator.

They are anonymous beings of light like
so many radiant molecules
doing their job in a well-oiled body
acting at ease. But their
body is the world, their

skin domains of transverse
communication, inside and out,
distant and near, and they are the

blue angels of Arthur Rimbaud, heraldic angels with
black wings of César Vallejo,
angelic aurora borealis sprites of
Shelley shinnying up the
purple shafts of night, and they are

supernatural warriors of India on plains of fiery clouds
riding fanatic horses steaming wide
billows of green, and they are

recorders of breaths,
measurers of dewdrops,
conductors of vitality to
grass blades and beard-hair, they

congregate in geometric fluidity as
vast as rock-crystals, as
tightly packed as

air swiveling around inside air
like those Chinese ivory balls carved
almost infinitely
one inside the other, or

one sphere outside the other, each

No drop of water falls from
faucet or
sweating brow, no
corpuscle of blood
circulates that is not

propelled and taken through its
paces by intentional consciousnesses

sent on their errands by
God!

And in Ramadan demons are chained up,
the Gates of The Garden are flung wide, and

angels scour territories of The Alive for

heart made lighter by the strong
recollection of its Source!

Angels, furtive and unseen
pass quite easily through matter.
They move like a cascade’s glittering sheen
from peak-top crashing with a clatter

as rapidly and deft as water.
Made of light, they move as light
that has no substance to get fatter,
but only, against the dark, more bright.

Angelic bands move through the night.
There’s no cliff, gulf or canyon too
outrageous for their leaping flight
to cross, or swim, or scatter through.

They’re what makes everything alive.
Dead worlds vibrate when they arrive.