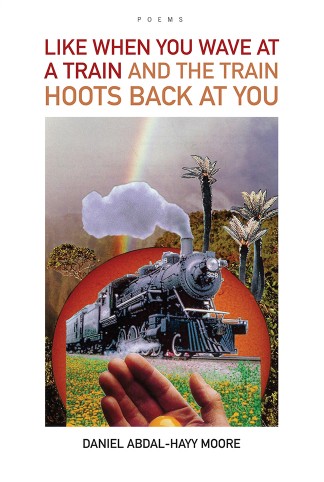 This may be my most personal book, as I wrote this collection of poems as an attempt to definitively and honestly connect in a deep way with Farid, my teenage stepson. The dynamic of our relationship, from the time of our entrance into each other’s lives after I married his mother in 1980, when he was a little over two years old, was basically sound. But perhaps as with all teenage boys and their dads, step or no, by the time he was thirteen we were somewhat, though never disastrously, at odds. As a writer of poems rather than a swinger of baseball bats, a caster of fly fishing rods, a shooter of pheasant rifles, and as someone who had sat at the feet of various saintly shuyukh, or Sufi Masters, in particular the great scholar and Qutub Shaykh Muhammad ibn al Habib of Fez, buried now in his Zawiyya in Meknes, I thought I might try to instill some wisdom into the proceedings as the seal of our spiritual bond.

“Ah, since you’re not my
natural son, you can be my
supernatural son! No actual genes of mine

swim in your blood, your flesh doesn’t
resemble mine, though since I’ve been your
dad from the time you were two, we now have a
definite

White Eagle in a Pit

There’s a lot to be said for
growing up. I don’t remember noticing it much
until pubic hair. Then the body

takes off in all
directions. Big feet. Boniness. Boners. Brainstorms.
It must feel strange, inflating that way into
space. Touching other

worlds by increased dimension alone. Trying on
thoughts never before entertained, voices imitated
nothing like your own. Skewed
attitudes, screwed-on faces,
one of which might be yours.

The reluctant largesse of being
about to be fourteen,
strapped to the
seasonal wheel that pushes the
past behind it as it
rotates forward. Ironing you out.
Making you more dimensional. Taller.

Perpetual summer with collapsing panels in it of
winters and deep dark troughs. Where you may find
oil rolling into braids with water. Gut
messages. Lengths of time
lengthening. And there it is! White
eagle in a pit! It

rises all of a sudden –

This may be my most personal book, …

Someone asked a Zen Master, “What is Buddha nature?” and the master put his shoes on…