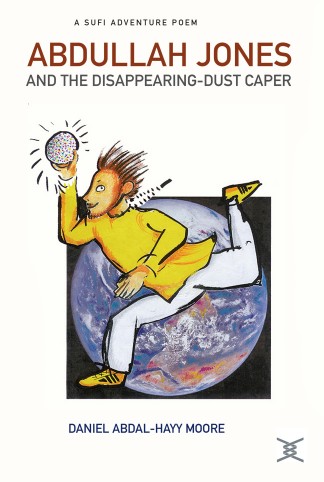 This high adventure, in loosely metered heroic couplets, follows Abdallah Jones on his quest to capture the ball of disappearing-dust from the mad Sorcerer and stop the destruction of the world. He has been given the task by his Sufi shaykh, which takes him to the Sorcerer’s castle, where he meets Marbug the elf, Neptune, the King of the Jinn, and a collection of sweet and evilly dangerous characters along the way with more cliff-hangers and near-deaths than anyone but Abdallah should have to endure – and finally to Madina, the city of the Prophet Muhammad, peace and blessings of God be upon him, his shaykh and people from the ‘Umma of Islam from all over the world, and a marvelous solution to the whole caper. Black and white illustrations throughout by the author illuminate the text. 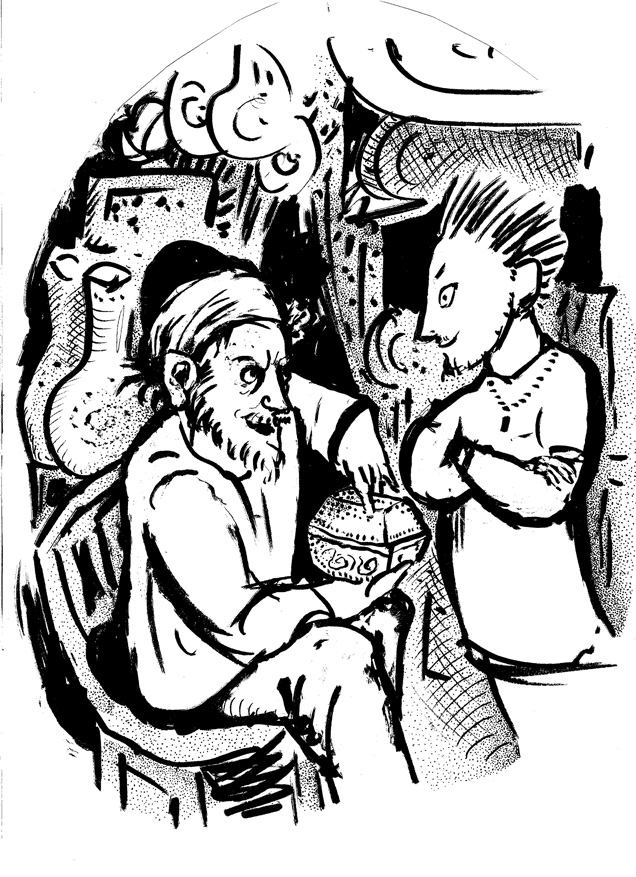 Abdallah Jones jumped off the train as it drew near the
trestle with the glass ball of disappearing dust in
his hand
which he had just snatched from the evil magician who
drew strange symbols on a tray of sand
preparing to make all the people in the world disappear!
Abdallah had been trying to get into his castle for a
whole year,
finding out all he could, disguising himself as an idiot
beggar in the marketplace,
standing close to the Caliph’s horse when it went on
parades, keeping an expressionless face
as the dust rose around him, trying to get clues.

Finally he found out, in a back-room antique shop,
from one of those sinister marketplace sellers who
sits in a broken-down chair and just chews,
the whereabouts of the Sorcerer’s castle.

“But you cannot go alone, my boy, and if they catch you,
what a hassle!
They usually throw people like you to the sharks,
or stretch you on a stretching rack, holding flares close
to your face so the flying sparks
burn out your eyes,
or some such other unpleasant surprise.
He’s the Caliph’s man. You don’t think you can reach him
so easily!”
But then the man drew Abdallah toward him, cocking
one eye and whispering sleazily
into his ear.
“Never fear –
for the right price I can get you in, but the rest is up to you!”

“What’s the right price?” asked Abdallah. And then the
old scoundrel curled his toes up in his pointed shoes
and became leeringly his most archetypical self, poor
man,
looking like a gnarled and deformed elf more than
a man. He was all calculation, all scheming, all
“opportunity knocking.”
But Abdallah stayed cool. Even this experience he didn’t
let on was shocking
to him, here among the dusty bric-a-brac.

“I’ll take all your money – all of it! Don’t hold any of it
back!
Only then will I get you into that Sorcerer’s hall.”
Abdallah trusted Allah. He reached into his pocket and
pulled out all,
not a cent did he save behind.

“Are you sure that’s all?” asked the man, “or Allah strike
you blind?”
“Yes apotekerendk.com/!” said Abdallah with absolute confidence.
“One thousand, seven-hundred dollars, and eighty-seven
cents.

It’s what I needed to find the powder before that shaytan
uses it.
It’s a plot against mankind, and I’m the one sent by my
shaykh to be the one who defuses it,
insha’Allah! But I must hurry before he puts it to use!”

“Then put on this cloak, this hood, these rags, and take
this jeweled box the magician bought – the ruse
is this! You’ve come from my shop and are delivering
the box to his room.
Then you step out into the hallway and get behind one
of the curtains, and quickly turn the rags inside-out.
You’ll then look like just another groom
for the Sorcerer’s horses. That way you can remain in
the castle for a little while.
But be quick! They’re sure to notice you right away. Be
sure not to smile!
They never smile there. It’s a dark place, and they’re all
a gloomy lot.”
“Don’t worry,” said Abdallah, “just give me the clothes
and let me put them on. I feel I haven’t got
much time. That madman may strike any moment!”

So he got into disguise, and was given the box, with a
letter written by the antique dealer to be sent
with the delivery, to make it all look official.
Then Abdallah took a little white homeopathic pill
for the jitters and set off.
He made as long and gloomy a face as that of Boris
Karloff
as he walked through the street studying the map the
man had given him,

through the market, past a dark door, one, two, three paces,
the wind having driven him
to a hole in a wall – there! With no one looking, he
darted in
and walked tight-shouldered between narrow shrubbery,
then came to a stream, and found a little boat he
quickly departed in,
going along a shadowy channel, finally under another
wall, into a kind of stone building,
then in total darkness, damp and spider-webby, all alone,
mildewing
sides brushing his hands as he rowed, the only sound
the splashing of oars.

Then he saw a tiny peep of light, and the sound of a
waterfall cascade as it roars
down a huge chasm.

Suddenly the boat lurched forward in a strong spasm
and he found himself outside heading for a cliff!

Would he go off the edge, here all alone, and be found
weeks later dead, and wet, and stiff? 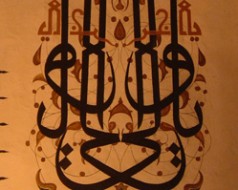 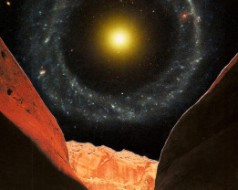 I lay my body down. Light occupies its place in space aslant the brown town. I leave a bone in the room. The bone…