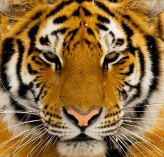 LIFE OF PI the Movie

Just back from seeing The Life of Pi, in 3D, overwhelmed by it, and for me a truly cathartic experience. In it we are face to face with, well, in a metaphorical sense, in not overly rigorous tashbih perhaps, God.

Near the end, the boy hero looks up and thanks God (not the tiger) for bringing him with the live tiger on the little white lifeboat in the vast ocean, to keep him awake, aware, one-pointed. In focus. And for me, having undergone a summer this year of cancer treatment, every day asking God’s help with the most sincerity I’ve ever had, and the most focus, there was a deep poignancy of that facing-off, that face to face and ever-present encounter, and the film actually opened some locked floodgate of emotion in me when storm and ocean and tiger were over, and in cathartic release, let it out.

We are so brave, we have such faith, yes, but there is a buildup of, not fear really, but encountering the fearsomeness of existence and death, that impinges on us when we’re truly fighting for survival through a sickness, or whatever tribulation. As the boy was on the open sea, tiger constantly before him.

I had watched a short video of Shaykh Hamza Yusuf in the afternoon, on Dunya, this-world concerns. And in it he was saying that dunya is set up to bring us tribulations, a state in which we are closest to God, usually closer than when all’s going well, and that we look to their transformation into ease, as the Companions did, blessings on them all, who endured tribulations in their lives rather than in the practice of their Way, which has a profounder anchor and an unwobbling pivot. For with difficulty is ease. Is ease.

And then in the evening, Life of Pi. Whew. And both, as Shaykh Hamza presented it also, have a happy ending. That we all look forward to a happy ending, and pray and hope for it. And then the film reminded me of a poem from my book, Salt Prayers, poems written in 1998, inspired from another film, Passion in the Desert, where the beast is a leopard, that in turn reminded me of a quote I’d read long ago from Al-Ghazali, raheemullah, whose gist was that if a real lion is at our throats it is no longer a metaphor for God. It is God. The Doer in all doings.

At this moment Life of Pi is up there with Himalaya and Babette’s Feast as the greatest spiritual films I’ve ever seen. They advance you on the Path.

I’M IN LOVE WITH A PANTHER

I’m in love with a panther. I’m in
love with her claws, with her
savage breath and those teeth on the
cutting edge of danger. I’m in

love with her eyes which see in a way I
can’t know, not with
human seeing, green-gray, they

flash in the night, spotlit, as if the
light comes from deep inside her and is
laser beamed through her pupils outward. I

love her sleekness. She can be ahead of me in
a pounce, her back flanks rippling with
sheer power. Terror

in the air as she leaps forward. I love that she’s
distant from me in nature, I’m bound by her
strength over me, she could
kill me in a wink and

probably will, most certainly will, when I
least expect it, from the side, or from in
front, with sweet and
ample preparation, closing in on me gradually,

I love that, I love her darkness, sheen of
burnished velvet, she is erotically
charged but far beyond such
passing passions, she

flattens next to me and flicks her ears. She’s picking up
faraway sounds. No sound
escapes her. I love the

shadow she pulls close across me, starting from my
toes and moving upward to my
scalp with hair standing on end.
She looks me full in the eyes, but when I
gaze into those eyes like
freefalling on a night of
absolute blackness, falling deep
into them, it’s nothing

familiar, nothing I can easily translate, it’s
cuneiform hieroglyphics and the
calligraphy of an enticing death, that we

both get wrapped in a black fur cloak and that we
lose our distinct identities, and when the
smoke clears we’re at ease among her

rocks at her accustomed height, just
above the tree line, noses

pressed against a sky so pristine white
it’s like the inside of shell.

Her teasing only makes me ask for more.
Reality goes way past metaphor.

She takes me to the edge and I look down.
She crouches forward, face impassive, yawns.

Miles down the rock face is her element.
She’s part of shale and schist, rock, cement.

As easily down an office building’s slope
I look down with my panther at my side, hopeless

as well as full of hope. Black thing. Gorgeous
as death is. Through valley gorges,

peaks, stealthily as well as obviously she goes.
Her blackness starkly silhouetted when it snows.

Her purr’s a sound like no sound ever sounded.
Her growl like gurgling tree roots, primordial groan.

With her I’m never lonely, yet alone.
Her roar puts out the night, lights up the moon.

My panther who blends into the night
and is gone. Present but

not plainly visible.
Her formlessness spreads out across the sky at dawn.

My God, little flakes falling from everything hang in the air forever, then planets form around them, and around them moons. T… Of Course the Essence of it All