Ladder Leaned up Against the House

climbed and climbed until he totally
disappeared

to the top of space

Birds wheeled upside down in a
yellow sky that flashed alternately

capabilities for success
a roller-coastering thrust that uplifts the

“Nearer my God to Thee”
our own disaster become

(Note: This morning’s poem, the ‘Eid al-Adha for some in this world, or the day before or after for others, after considering its enigma, reminded me of my Hajj in 1972, at the simpler Kaaba, before the giant stadium masjid al-haram was built… and the sensations of uplift and sweet liberation we felt…)

We burn the town down… then we send in more fire trucks to patrol the smoke? It’s the morning after The Decider’s decision to…

Would the Innuit live to wear his new coat of seal fur? Would the moose live to swagger a bit with that rack of… 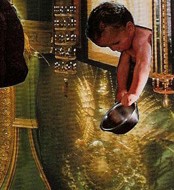 Home / Poems / Ladder Leaned up Against the House