Here’s a Row of Innocuous Boxes

(Here’s a poem I came across from my book, Salt Prayers, as I was looking for poems to read this weekend at the Philadelphia Book Festival… a bit of innocuous meter and rhyme for a change… veiling a bit less innocuous meaning?)

HERE’S A ROW OF INNOCUOUS BOXES

Here’s a row of innocuous boxes,
some of them rattle, some of them roar.
But I think I detected a little wiggle
as they stood on the floor.

Black on one side, white on the other,
tops anonymous dark shade of gray,
all sizes, tall, short, squat, fat, tubular
the way boxes look every day.

But these aren’t regular boxes, I think,
they shuffle around when you’re least aware,
they turn a side to you opposite the one you saw
when you looked over there.

The first one’s now second, the fat one’s sideways,
the long one’s actually nowhere to be seen,
the black one’s now facing you, making you gloomy,
the red one’s turned a bright green.

They’re out of order, they’re not lined up,
they’re all emitting a strange kind of noise,
there’s one very small one acting innocent –
it’s just one of its ploys.

You can’t take these boxes at all on face value,
you can’t be sure any more what you see,
you think they’re not empty, there’s no way of knowing —
I’ll open one at the count of three:

One, two, three! It’s empty! it’s a hoax!
Must I open them all to make absolute sure?
OK. Fine. I’ll open each box,
to be scientifically pure!

That one, shimmying out the corner of my eye,
I open its flaps, there’s a single wing flying
slowly across an endless black sky —
I feel like crying.

Third box, triangular, open its flap,
golden eye hovering, blinkless, over all,
my mind’s on fire now, ready to snap,
my attention span’s held in thrall.

Next box, bridges in all directions
over rivers of honey and milk and death,
crystalline, heavily trafficked, projections
to take away breath.

Infinite space in another box, eternity,
abysses, fissures, primordial ooze,
and what comes over me is total serenity –
we’re meant to win here, not lose.

What’s inside’s revealed in all its brilliance,
shaking our hearts with the light of truth –
we’re meant to close all the boxes up again, and dance
like the ecstatic moth

who knows that flames will consume it entirely,
yet flies in anyway, joyous in flight,
to be passing its lifetime, minutely, hourly,
reunited with Light.

A Little Mouse in a Hole 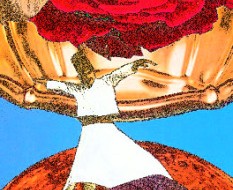 (The reader here is Sidi Ayman Muhammed, from Britain, a graphic designer, rapper and poet) The drunk in Allah are free from t…