Poem from: In the Realm of Neither

THE ENORMOUS CORRIDOR OF SORROW

In the enormous corridor of sorrow

and the clatter they raise
is more deafening than silence but

leads to the same end the same bolted door

though it doesn’t matter

I can’t find my eyes among the rubble

at home with his happy shadows

This poem was written at the height of the tragic summer war in Lebanon, and the sentiment continues into the seemingly endless day of tragedy in Iraq and elsewhere. Arrogance is the vice here, and Napoleon has always typified for me the arrogance of a leader who rather thinks he is God. It’s a huge mistake… and everyone suffers. Because at base they are intellectually, emotionally and spiritually stunted, and God intervenes, much to their surprise I’m sure, and cuts them down at the end.

Note to readers These poems are begun by an inspired first line or two, and during this particular development from poem to po…

Little Black Fly on the Wall

The little black fly on the wall doesn’t stop to think what he knows, those multiple eyes are enough. God’s sight through them… 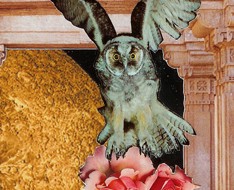 Of Course the Essence of it All

Home / Poems / Poem from: In the Realm of Neither