what they do now at the
flick of a switch” 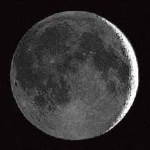 How strange that it’s all based on the sighting of the slightest sliver of the moon! The whole sky veils it then, only the…