The Flame of Transformation Turns to Light

Mortal body in a material world – Ameen – things aren’t at all what they
seem
Remembering God’s true extra-spatial dimension seems to be a delightful
aim of God! 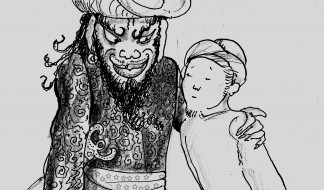 Would the Innuit live to wear his new coat of seal fur? Would the moose live to swagger a bit with that rack of…

Home / Poems / The Flame of Transformation Turns to Light